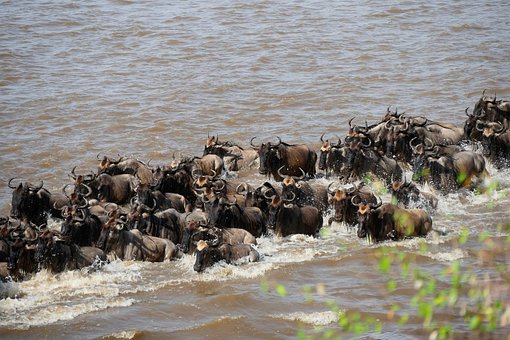 The African continent is a haven of thrilling and impressive geographical splendors. From the River Nile, the Sahara desert, the Great Rift Valley, the Victoria Falls in Zambia to the table mountain in South Africa.

On top of the list is the remarkable heritage of Africa, the Great Wildebeest Migration. This epic migration takes place between two countries (Kenya and Tanzania) and sees a confusion of wildebeest, few herds of zebras and gazelles move in a clockwise direction from the southern part of Serengeti (Tanzania) to the Masai Mara Game reserve (Kenya).

This movement is fundamentally in search of rich verdant vegetation and adequate drinking water. On that note, we could say the rains more or less are the determinant factor as to when and how the migration takes place.

The most iconic part of the migration is the Mara River crossing from Serengeti to Mara plains. The crossing attracts a large number of tourists who come to witness this riveting event.

When is the wildebeest migration?

Since Migration is a continuous process, the herds find themselves in different parts of the Serengeti-Mara ecosystem in different seasons of the year.

During this period the confusion of wildebeest arrives on the Serengeti plains where there is plenty of green grass for grazing. The herds move to Ndutu Plains in the Ngorongoro Conservation Area, which is part of the Serengeti national park (south). The herds then spread to the southeast of Seronera where they are nourished by the Seronera River.

Early February or late January is the calving season which sees the birthing of many calves. The timing is just right as there is plenty of green grass for the new mothers who need enough calcium and iron to produce nutritious milk for the young ones. As nature would have it, this is also an opportune time for predators like the lions and leopards who would mercilessly prey on the vulnerable calves.

Since the cycle of life starts at birth we would consider this period as the start of the migration.

In April the herd starts their great migration North for better feeding fields.

After depleting the grass in the southern part of the Serengeti, the herds move north and west, in search of fresh grazing and water but not as a single confusion.

The herd congregates to the West as they wait to cross the crocodile-infested Grumeti River. Others go through the Loliondo area into Lobo while some chose to go North of Seronera.

This period also marks the rutting season for the herds as the male’s fight for mates.

This is when the iconic river crossing occurs. The herd gathers in the Northern Serengeti before crossing the Mara River and Sand River. The wildebeest cross as one confusion and in unison.

It is usually stunning to see herds frantically cross the Mara amidst the looming danger of hungry crocodiles, the muddy and sticky riverbed. And the devouring lions, cheetahs, wild dogs, and leopards who wait on the other side of the river.

It is usually heartbreaking to see the unlucky ones being devoured by crocodiles, as they say in the game Survival is of the fittest.

Patience is needed for one to see this exhilarating event as it could take days before the first herd starts to cross the river.

Here, the Mara plains have dried up and the herds are retracing their way back to Serengeti. The herds are re-crossing the Mara River to Tanzania. They can be easily spotted at Western Loliondo and the Lobo area in Northern Serengeti where the grass has grown again and water is easily accessible.

The herds continue moving to the southern Serengeti and the cycle repeats itself. 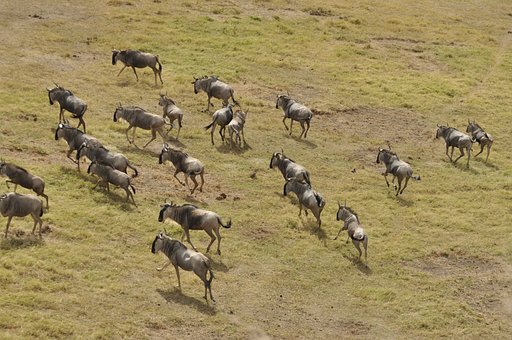 If you’re planning to go on a wildlife safari, to see the wildebeest you should consider the time of the year and what you actually want to experience.

For example, if you find calving more exciting, then February would be your best month to tour the southern Serengeti. On the other hand, the epic Mara crossing can be witnessed in August.

In addition, If you have ample time, then you can consider migrating with the herds in the many migration camps surrounding the Serengeti or Masai Mara. 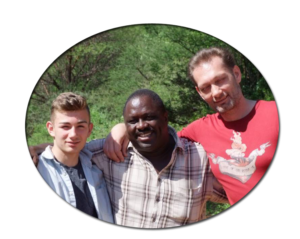 Experience and unforgettable safari in Kenya National Parks. The unique wildlife and breathtaking landscape will inspire you. Relax with a subsequent bathing stay in one of our hotels in Kenya or Tanzania!

Some of the links contained in this website are actually affiliate links. We will make a commission from any qualifying sales made through those links. 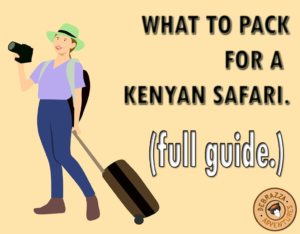 To help you plan for your safari, here is a short and precise guide. Click to get access to it.

We use cookies on our website to give you the most relevant experience by remembering your preferences and repeat visits. By clicking “Accept All”, you consent to the use of ALL the cookies. However, you may visit "Cookie Settings" to provide a controlled consent.
Cookie SettingsAccept All
Manage consent

This website uses cookies to improve your experience while you navigate through the website. Out of these, the cookies that are categorized as necessary are stored on your browser as they are essential for the working of basic functionalities of the website. We also use third-party cookies that help us analyze and understand how you use this website. These cookies will be stored in your browser only with your consent. You also have the option to opt-out of these cookies. But opting out of some of these cookies may affect your browsing experience.
Necessary Always Enabled
Necessary cookies are absolutely essential for the website to function properly. These cookies ensure basic functionalities and security features of the website, anonymously.
Functional
Functional cookies help to perform certain functionalities like sharing the content of the website on social media platforms, collect feedbacks, and other third-party features.
Performance
Performance cookies are used to understand and analyze the key performance indexes of the website which helps in delivering a better user experience for the visitors.
Analytics
Analytical cookies are used to understand how visitors interact with the website. These cookies help provide information on metrics the number of visitors, bounce rate, traffic source, etc.
Advertisement
Advertisement cookies are used to provide visitors with relevant ads and marketing campaigns. These cookies track visitors across websites and collect information to provide customized ads.
Others
Other uncategorized cookies are those that are being analyzed and have not been classified into a category as yet.
SAVE & ACCEPT